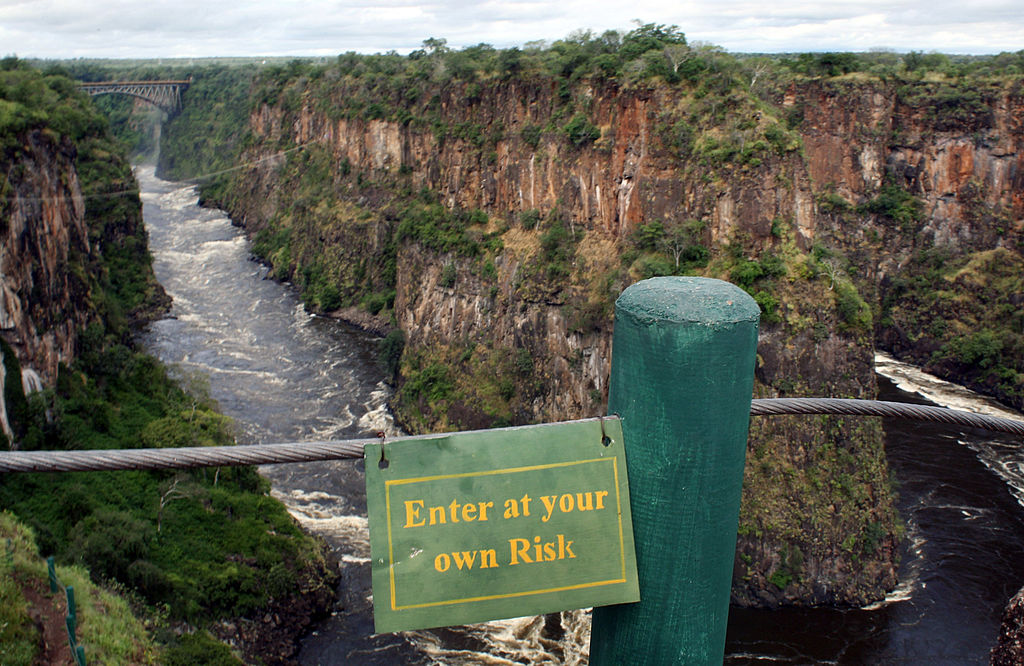 An 18-year-old teen, Amelie Osborn-Smith, was attacked by a crocodile while she was rafting with her friends in the Zambezi River below Victoria Falls in Zambia.

The British student from Andover, Hampshire just finished her A-levels at the £22,000-a-year St Swithun’s School in Winchester and was on a gap year holiday in southern Africa along with her friends when things got out of hand.

The teen’s father told MailOnline that his daughter had been resting her leg over the side of the boat when the crocodile clamped its jaws around her calf and dragged her into a ‘death roll’. “She’s in a pretty bad state at the moment in Zambia and we’re doing our best to try and get her back to have some proper definitive care here.”

Saved by the Nose Punch 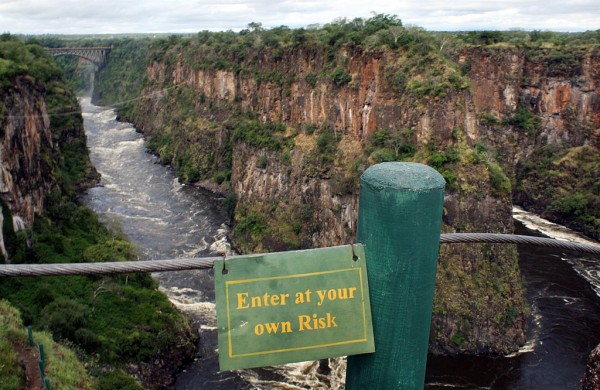 (Photo : Photo by John Moore/Getty Images)
VICTORIA FALLS, ZIMBABWE – MARCH 17: A sign warns tourists from proceeding from a lookout point over the Zambezi River March 17, 2008 below Victoria Falls, Zimbabwe. Called one of the world’s seven natural wonders, Victoria Falls stretches 1708 meters, forming the world’s largest waterfall. The spectacle continues to draw thousands of tourists every year, injecting a much needed dose of foreign currency into the local economy.

While the British backpacker was in a horrific crocodile attack, a brave friend came about and ‘furiously’ punched the 10ft long beast on the nose until it let go. Moments away from death, the reptile eventually released her from its deadly grip.

A source told The Sun: “They had taken a break from rafting and she was swimming with a friend when it happened.

“As soon as it happened, he dived under the water and started punching the crocodile furiously.

“Then others jumped in to help. It was chaos. There was blood and people thrashing everywhere. She is lucky to be alive.”

Amelie was airlifted to hospital in the capital Lusaka for life-saving surgery of her shredded leg.

“Obviously with a crocodile bite there’s a huge risk of infection and she’s got a very severely damaged leg. It’s quite a distressing situation,” Mr Osborn-Smith said. “She’s been stabilized as best they can but it’s still pretty touch and go and we’re trying to arrange appropriate consultants here lined up.”

“The other issue is that Zambia is now on the Covid red list, so there are various hoops which need to stepped through quite carefully.”

The company based in Livingstone has been operating in the Victoria Falls region since 1996, and they considered the stretch of the Zambezi River just below the falls the safest to enjoy as “crocodiles prefer the calmer, flatter sections downstream.”

On their website, the company said “safety always comes first” on the “adrenaline-filled and safe adventure activities”. While a spokesman for the firm confirmed that Amelie was on a trip with them, he declined to give further details on the incident.

Although attacks at the falls are rare, they are not totally unusual. In 2018, a Zimbabwean woman canoeing above the falls was attacked by a 16ft crocodile and ripped off her arm just days before her wedding. The former national tennis player was fortunately saved by the medics who managed to stitch up the wound.

Several other tourists have been known to lose limbs, while others have died, in the croc-infested waters of the Zambezi River.

Also read: Earth’s Mountains Rose Up Thanks to Explosion of Sea’s Tiny Organism

Tesla achieves new record sales in China; half of its record year of deliveries came from Giga Shanghai
Space Force to use navigation data from LEO constellations to detect electronic interference
Nord Stream 2 could be major leverage against Russia — but using it is complicated
Author Correction: Histidine catabolism is a major determinant of methotrexate sensitivity
Goldman-backed digital bank Starling boycotts Meta over scam ads