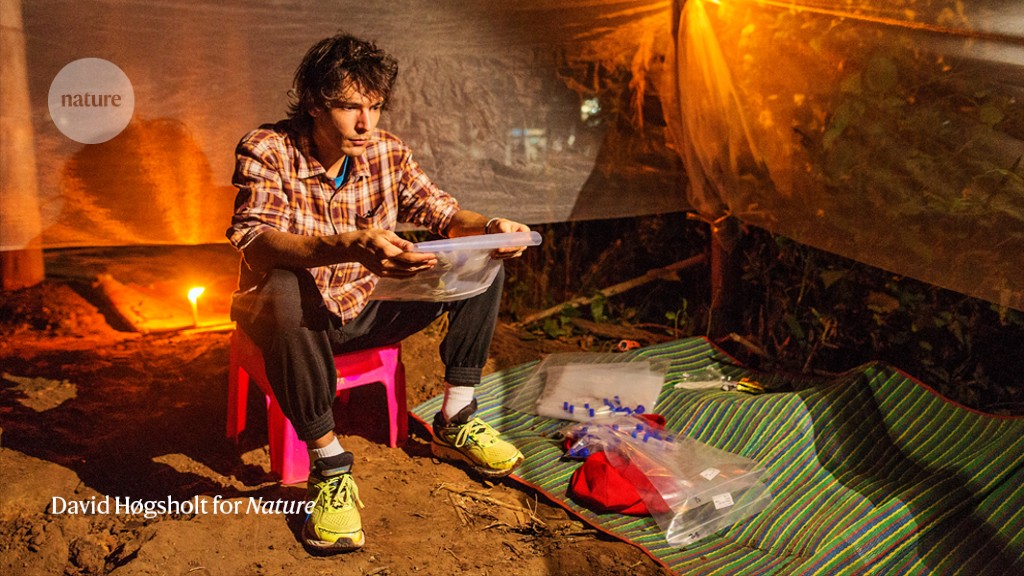 Every year, my team and I collect mosquitoes at about a dozen villages in Kayin state, Myanmar, a conflict zone near the Thai border. Run by the Shoklo Malaria Research Unit, based in Mae Sot, Thailand, it’s one of the largest operations of its kind in the world. It looks like I’m working alone in this picture. In reality, I’m with a team of about 50 people. Most of the collection is done by local villagers, and a lot of work goes into training, coordination and logistics.

We travel by boat, scooter, tractor or car, and sometimes by elephant, to our sites. Htee Kaw Taw, the village in this photo, is accessible by car for only part of the year. Most collections are done between 18:00 and 06:00 for 5 nights, although we occasionally collect mosquitos for 24 hours to observe those that feed in the daytime. We set up five indoor and outdoor collection sites, and often an outdoor site with a ‘bait’ animal such as a pig or cow, to observe a range of feeding behaviours from the dozens of mosquito species that transmit malaria. Each mosquito goes — alive — into a plastic tube for transport back to our laboratory in Mae Sot. Through various projects, we’ve collected probably around 300,000 insects since 2013.

We’ve learnt a lot from them. Our research, supported by a joint collaboration on tropical medicine by Mahidol University in Bangkok and the University of Oxford, UK, has shown that interventions to control malaria that work well in Africa, such as insecticide-treated bed nets and indoor spraying, are less effective in southeast Asia owing to the variety of mosquitoes there that feed outside or during the day.

We’ve also shown that providing antimalarial drugs to select populations prophylactically — known as mass drug administration — vastly reduces the number of mosquitoes carrying the parasite. The work supports the idea that people without symptoms are a major reservoir for malaria, and the strategy could go a long way towards eliminating the disease in southeast Asia.

COVID’s career impact and embryo secrets — the week in infographics

How to turn your ideas into patents

Wolbachia goes to work in the war on mosquitoes

Europe’s COVID death toll could rise by hundreds of thousands

When are masks most useful? COVID cases offer hints