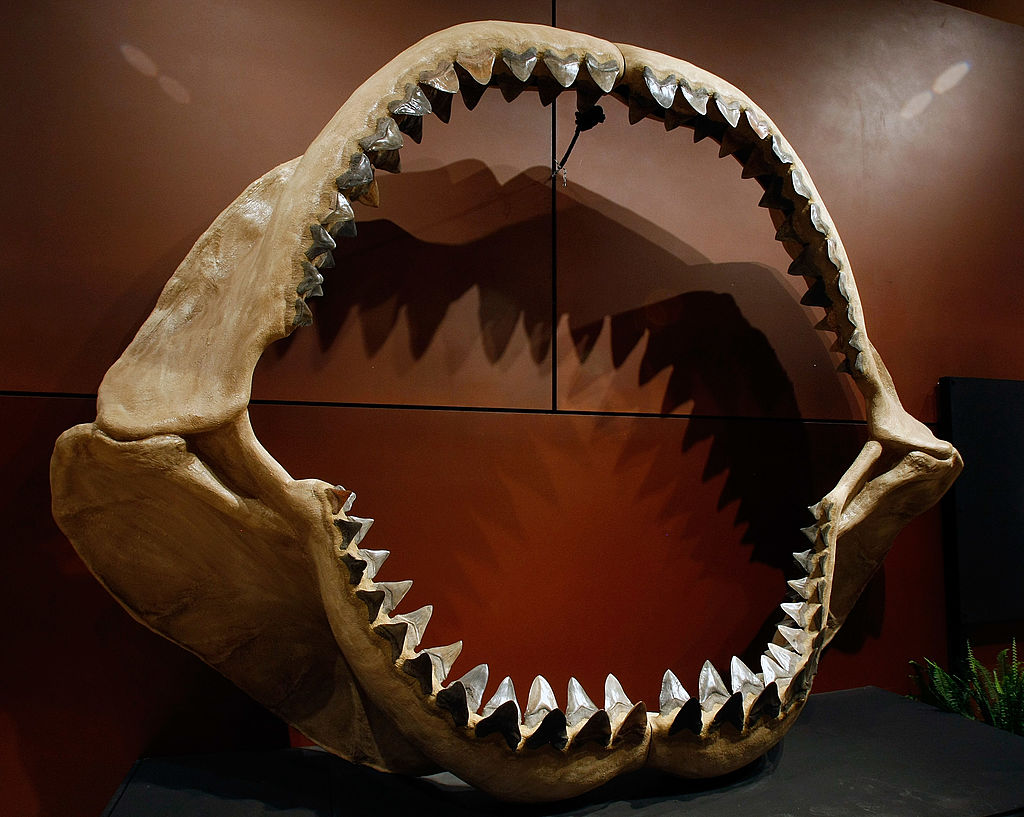 Approximately 23 to 3.6 million years ago, the now extinct species of mackerel shark known as the Megalodon or ‘Big Tooth’, existed as the world’s largest shark and fish that ever lived.

Known as dominant predators, experts were able to find very rare fossils of shark cartilage that evidenced ancient shark-on-shark attack from the age of the megalodon. The “truly remarkable” fossils included four rare ones which fossilizes very seldom.

All four vertebrae are covered in shark bite marks, in fact two still have pointy shark teeth sticking out of them. The researchers and amateur fossil hunters found it extraordinary that the shark skeletons made of cartilage fossilized very well.

The fossil finds suggest that millions of years ago, ancient sharks gobbled up fellow sharks off what is now the U.S. East Coast.

“Sharks have been preying upon each other for millions of years, yet these interactions are rarely reported due to the poor preservation potential of cartilage,” study co-researcher Victor Perez, an assistant curator of paleontology at the Calvert Marine Museum in Solomons, Maryland, told Live Science via email.

Shark-on-shark predation or cannibalism is nothing new to the experts. It had been a known behavior exhibited by living sharks including many lamniformes – an iconic group that includes goblin, megamouth, basking, mako and great white sharks – which, as fetuses, sometimes devour their siblings in the womb, the researchers said.

However, the new find was rather rare, as it included an ancient shark-versus-shark attacks. The oldest evidence of shark-on-shark predation can be dated back to the Devonian period (419.2 million to 358.9 million years ago), when the shark Cladoselache devoured another shark, whose remains were fossilized in its gut contents.

Such ancient evidence was never seen in abundance, which is why the bite traces were “truly remarkable” for the team.

Also read: Dolphins Effectively Pass on Information by Changing Volume of Their Whistle

All of the four fossils in the study were dated to the Neogene period (when megalodons stalked the deep waters), and does not involve megalodon. Three of the shark fossils were found at Calvert Cliffs on the Maryland coast between 2002 and 2016, and the fourth one was discovered in a phosphate mine in North Carolina in the 1980s.

“To find cartilaginous elements of a shark’s skeleton is already rare, but to find these skeletal elements with bite traces is truly remarkable,” said Perez. “There needs to be exceptional circumstances for this predatory interaction to preserve for millions of years and to be recovered by someone who recognizes its significance.”

So, how did these four fossils survive?

Perez explained that the vertebrae that make up the spinal column called centra “are composed of a denser calcified cartilage that preserves better than other parts of the skeleton.” In fact, these four fossils are the first documented ancient shark centra with shark bite marks on them, according to the research team.

Although it was unclear whether the bites were made during an active attack or a scavenging event, the team believed at least one may have come from an attack with two teeth sticking out showing signs of healing, indicating that the shark survived an encounter.

Also read: Kingdom Animalia’s Weirdest Eyes and How They View the World