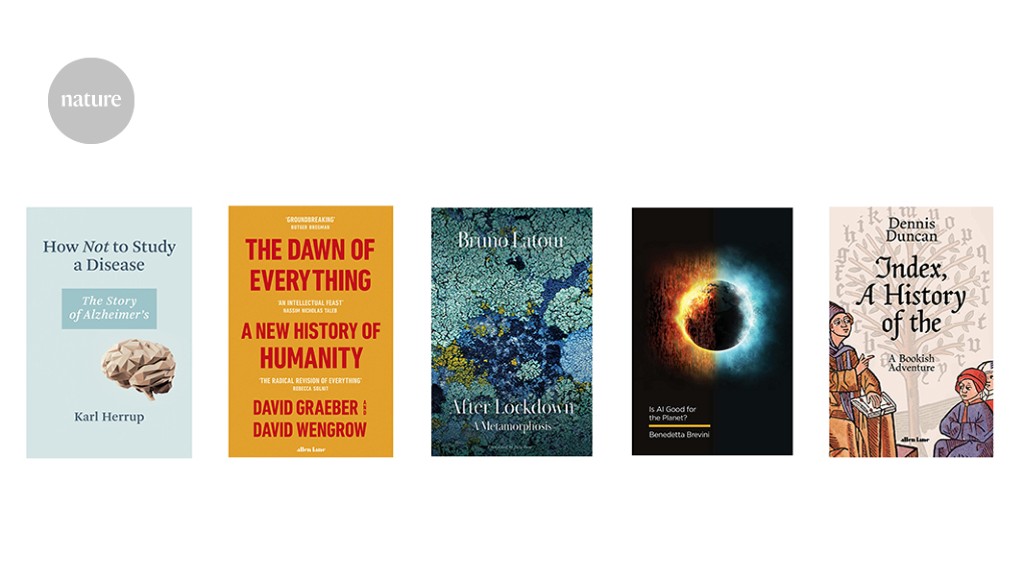 How Not to Study a Disease

Neurobiologist Karl Herrup argues that an acute problem for research into Alzheimer’s disease is the lack of a definition. While writing his important, accessible study, he found that no two experts described the degenerative condition in the same way. Alois Alzheimer’s original, post-mortem diagnosis of a single person in 1906 attributed her mental confusion to plaques and tangles in her brain tissue. For Herrup, progress requires a definition “based on the symptoms of the patient, not on the deposits in the patient’s brain”.

The Dawn of Everything

Among the great variety of cultures discussed and compared by anthropologist David Graeber and archaeologist David Wengrow is the Indus civilization, which flourished for seven centuries, starting about 2500 bc, then vanished. It had a complex economy, maritime trade and a chief city with advanced plumbing, but has yielded no sign of palaces, temples, rulers or warriors. This subtle but revolutionary study challenges the consensus that hunter-gatherer egalitarianism inevitably evolved, through cities, into hierarchical, bureaucratic states.

Is AI Good for the Planet?

For all their benefits, artificial intelligence (AI) technologies are damaging Earth, argues journalist Benedetta Brevini in a short but powerful assessment. The effects are most obvious in the ever-increasing energy needed for data centres, but also in AI’s boosting of “uberconsumerism”, with its proliferation of products, packaging waste and built-in obsolescence — not to mention increasingly efficient fossil-fuel extraction. A 2018 Amazon Web Services report, Brevini notes, was called ‘Predicting the next oil field in seconds with machine learning’.

Index, A History of the

The first web page (launched in 1991) was a subject index. When we Google something, we search not the entire web, but Google’s index of it. These observations typify literary historian Dennis Duncan’s wide-ranging and entertaining history, beginning in thirteenth-century European monasteries and universities. Despite the existence of indexing software, satisfactory results still require flesh-and-blood indexers. He proves the point with a computer-generated index of his book for ‘A’, with the absurd final entry: “amusement, 180/ mere, 198”.

“Let’s celebrate the experience of a pandemic,” writes philosopher Bruno Latour in his brief but dense meditation on COVID-19, inspired by Franz Kafka’s 1915 novella Metamorphosis. The pandemic, he says, has made us realize — through social distancing and mask wearing — “to what extent the distinct individual was an illusion”. He is not just being ironic: he argues that a new “global awareness” triggered by lockdowns might help to unite us in facing the even more demanding threat of climate change.

The author declares no competing interests.

Why I swapped the piano for pipettes

How pirouettes and pliés prepared me for a research career

Collaborations with artists go beyond communicating the science

Why I swapped the piano for pipettes

The lesson of talk over tea and cakes? Local research matters