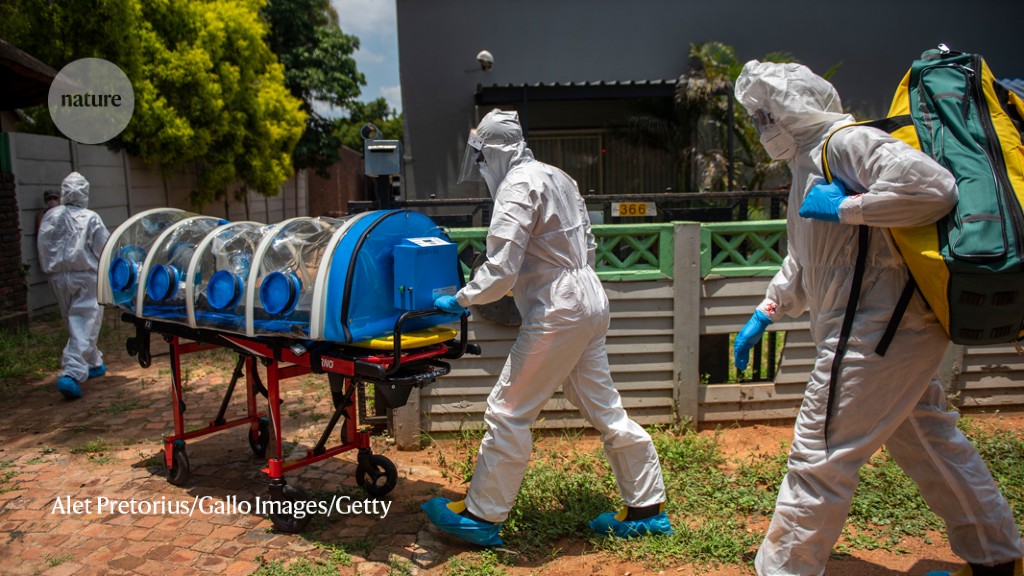 Researchers in South Africa are racing to track the concerning rise of a new variant of the coronavirus that causes COVID-19. The variant harbours a large number of mutations found in other variants, including Delta, and it seems to be spreading quickly across South Africa.

A top priority is to track the variant more closely as it spreads: it was first identified in Botswana this month and has turned up in travellers to Hong Kong from South Africa. Scientists are also trying to understand the variant’s properties, such as whether it can evade immune responses triggered by vaccines and whether it causes more or less severe disease than other variants do.

“We’re flying at warp speed,” says Penny Moore, a virologist at the University of Witwatersrand in Johannesburg, whose lab is gauging the variant’s potential to dodge immunity from vaccines and previous infections. There are anecdotal reports of reinfections and cases in vaccinated individuals, but “at this stage it’s too early to tell anything,” Moore adds.

“There’s a lot we don’t understand about this variant,” Richard Lessells, an infectious disease physician at the University of KwaZulu-Natal in Durban, South Africa, said at a press briefing organized by South Africa’s health department on 25 November. “The mutation profile gives us concern, but now we need to do the work to understand the significance of this variant and what it means for the response to the pandemic.”

A World Health Organization (WHO) expert group will meet on 26 November, and will likely label the strain — currently known as B.1.1.529 — as a variant of concern or variant of interest, Tulio de Oliveira, a bioinformatician at the University of KwaZulu-Natal, said at the briefing. The variant would likely be named Nu — the next available letter in the Greek naming system for coronavirus variants — if it is flagged by the WHO group.

Researchers spotted B.1.1.529 in genome-sequencing data from Botswana. The variant stood out because it contains more than 30 changes to the spike protein — the SARS-CoV-2 protein that recognizes host cells and is the main target of the body’s immune responses. Many of the changes have been found in variants such as Delta and Alpha and are linked to heightened infectivity and the ability to evade infection-blocking antibodies.

But the variant’s apparent sharp rise in South Africa’s Gauteng province — home to Johannesburg — is also setting off alarm bells. Cases increased rapidly in the province in November, particularly in schools and among young people, according to Lessells. Genome sequencing and other genetic analysis from de Oliveria’s team found that the B.1.1.529 variant was responsible for all of 77 of the virus samples they analysed from Gauteng, collected between 12 and 20 November. Analysis of hundreds more samples are in the works.

The variant harbours a spike mutation that allows it to be detected by genotyping tests that deliver results much more rapidly than genome sequencing, Lessells said. Preliminary evidence from these tests suggest that B.1.1.529 is spreading much wider than Gauteng. “It gives us concern that this variant may already be circulating quite widely in the country,” Lessells said.

To understand the threat B.1.1.529 poses, researchers will be closely tracking its spread in South Africa and beyond. Researchers in South Africa mobilized efforts to quickly study the Beta variant, identified there in late 2020, and a similar effort is starting to study B.1.1.529.

Moore’s team — which provided some of the first data on Beta’s ability to dodge immunity — has begun work on B.1.1.529. They plan to test the virus’s ability to evade infection-blocking antibodies, as well as other immune responses. The variant harbours a high number of mutations in regions of the spike protein that antibodies recognize, potentially dampening their potency. “Many mutations we know are problematic, but many more look like they are likely contributing to further evasion,” says Moore. There are even hints from computer modelling that B.1.1.529 could dodge immunity conferred by another component of the immune system called T cells, says Moore. Her team hopes to have its first results in two weeks.

“A burning question is does it reduce vaccine effectiveness, because it has so many changes,” says Aris Katzourakis, who studies virus evolution at the University of Oxford, UK.

Researchers in South Africa will also study whether B.1.1.529 causes disease that is more severe or milder than other variants produce, Lessells said. “The really key question comes around disease severity.”

So far, the threat B.1.1.529 poses beyond South Africa is far from clear, researchers say. It is unclear whether the variant is more transmissible than Delta, says Moore, because there are currently low numbers of COVID-19 cases in South Africa. “We’re in a lull,” she says. Katzourakis says that countries where Delta is highly prevalent should be watching for signs of B.1.1.529. “We need to see what this virus does in terms of competitive success and whether it will increase in prevalence.”