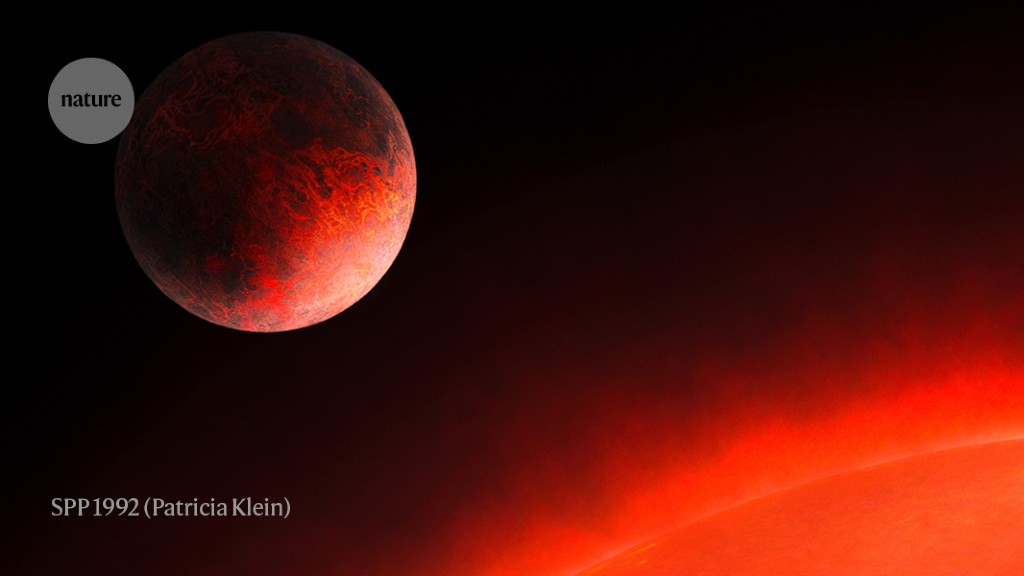 Astronomers have spotted the tiniest, most metal-based planet yet — an iron-rich world that is light years away from Earth and zips around its star once every eight hours.

The planet, known as GJ 367b, is three-quarters the size of Earth, but much denser. It’s more like Mercury, in that it is made mostly of iron and is superheated by blazing radiation from its star. GJ 367b is a searing 1,500 °C during the day — nearly hot enough for its iron to begin to melt.

GJ 367b is the smallest planet outside the Solar System for which scientists have been able to determine the composition, says Kristine Lam, an astronomer at the German Aerospace Center in Berlin. She and her colleagues reported the finding on 2 December (K. W. F. Lam et al. Science 374, 1271–1275; 2021).

Astronomers have discovered more than a dozen ‘ultrashort-period’ planets, which are so close to their stars that they make a complete orbit in less than a day. The GJ 367b discovery “showcases our ability to measure the mass of tiny, sub-Earth planets”, says David Armstrong, an astronomer at the University of Warwick in Coventry, UK. “Being able to observe such planets is fascinating and promises many Earth-like planet discoveries in the future.”

As researchers scrambled last week to learn more about Omicron, the latest SARS-CoV-2 coronavirus variant of concern, world leaders met to negotiate a way of ensuring that a crisis on the scale of the COVID-19 pandemic won’t happen again. Initially on the table was a legally binding pandemic treaty that would dictate how nations should respond to future outbreaks. A fuzzier form of that proposal is now moving forwards, to be sharpened in the months and years to come.

“Omicron demonstrates just why the world needs a new accord on pandemics,” said Tedros Adhanom Ghebreyesus, director-general of the World Health Organization (WHO), at the special session of the World Health Assembly, which was held from 29 November to 1 December in Geneva, Switzerland.

The original proposal, driven largely by the president of the European Council, Charles Michel, contained strong terms such as ‘legally binding’ and ‘treaty’. Backing off from the more rigid terminology seems to have coaxed all 194 of the WHO’s member states to reach a final consensus to move forwards. Countries that are particularly defensive about their sovereignty, such as the United States, often oppose treaties.

Michel has said that a treaty would be a good way to ensure the equitable distribution of vaccines and other medical countermeasures, such as protective equipment and diagnostic tests.

International accords typically take years to become reality, and the process for this one is expected to continue until at least 2024.

An unprecedented number of first-time investigators have secured viewing time on NASA’s Hubble Space Telescope in the years since the agency overhauled the application process to reduce bias.

In 2018, NASA changed the way it evaluates requests for observing time on Hubble by introducing a ‘double-blind’ system, in which neither the applicants nor the reviewers assessing their proposals know each other’s identities. All the agency’s other telescopes followed suit the next year.

The move was intended to reduce gender and other biases, including discrimination against scientists who are at small research institutions, or who haven’t received NASA grants before.

Data from the Space Telescope Science Institute (STScI) show that since the change was introduced, more first-time principal investigators have been securing viewing time on Hubble. In 2018, a record-breaking 15% of successful proposals came from applicants who hadn’t been awarded observation time before. That proportion rose to just under 32% in 2021 (see ‘First-time observers’).

Increasing numbers of female researchers have also secured Hubble observing time in recent years, according to STScI data. This year, just over 29% of successful applications were from female principal investigators. And in 2018, women had a higher application success rate than men for the first time.

Double-blind review has the potential to level the playing field for under-represented groups, says Priyamvada Natarajan, an astrophysicist at Yale University in New Haven, Connecticut. “This is a first step in mitigating biases,” she says.

NASA has rolled out double-blind review to all of its upcoming programmes, and some other organizations have adopted similar systems for allocating telescope time and research grants. These include the European Southern Observatory in Garching, Germany, and the Atacama Large Millimeter/submillimeter Array in Chile’s Atacama Desert.

Beyond Omicron: what’s next for COVID’s viral evolution

Omicron is bad but the global response is worse

US astronomy’s 10-year plan is super-ambitious