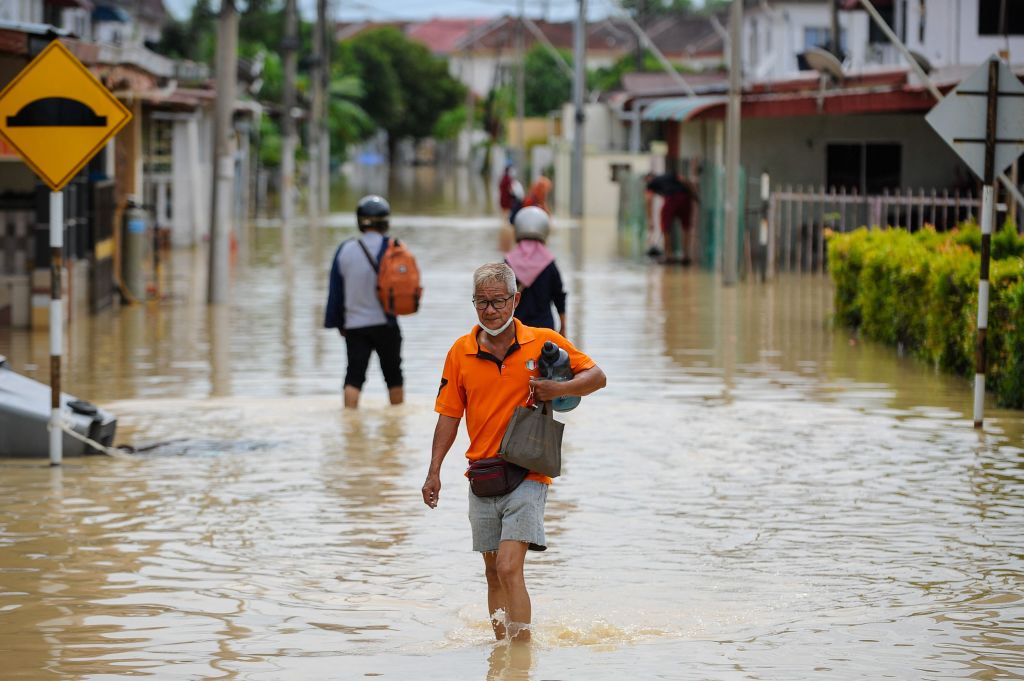 Flash floods are typically defined by violent torrents that burst across riverbeds, city streets, or mountain valleys, sweeping everything in their path. Flash floods can also happen  when a levee or dam fails, or when a debris or ice jam causes a sudden release of water.

It can be difficult to make the link between climate change and flooding. Not only do weather and human-related factors influence whether a flood occurs, but insufficient data on prior floods makes comparing them to today’s climate-driven flood patterns problematic.

Climate change “has detectably changed” many water-related variables that lead to floods, such as rainfall and snowmelt, it is becoming obvious. In other words, while global warming does not directly cause floods, it does worsen many of the causes that do.

Seven states of Malaysia hit by a massive flood

Hundreds of thousands of people have been forced to abandon their homes because of the worst floods Malaysia has experienced in decades, causing about 70,000 people to flee from their homes.

According to a police tweet citing Inspector-General Acryl Sani Abdullah Sani, fifty persons have died because of the floods and two are still missing.

Multiple high tide warnings were issued along Peninsula Malaysia’s west coast, and residents were advised to evacuate the region as soon as the reports were received. The National Disaster Control Centre has issued a disaster operation preparedness notice in response to the meteorological department’s forecast of continued heavy rains.

GCF is one of the World Meteorological Organization’s State of Climate Services contributing partners. The paper, which includes contributions from over 20 international organizations, development agencies, and scientific institutes, provides policymakers’ recommendations for improving the implementation and efficacy of climate services.

Malaysia has also requested $3 million from the United Nations Green Climate Fund to build a national climate change adaptation plan. According to Secretary-General Zaini Ujang, the strategy will focus on areas such as water, agriculture, and food security, public health, forestry, and infrastructure.The government has also pledged 1.4 billion ringgit (11.2 billion Thai baht) for those affected by the flooding.

According to Nadiah Dzulfakar, co-founder of climate activist group Klima Action Malaysia, “Adaptation will take much more funds compared to mitigation because we need to overhaul our urban planning, all these costly infrastructure projects.”

Nadiah Dzulfakar said that a draft adaptation plan should look at the impact of flooding and droughts on food security and crop yields, as well as the necessity for energy-efficient healthcare services with effective communication networks.

Also read: Victims of an Ancient Tsunami 3,600 Years Ago Resurfaced in Turkish Coast

No bursting for these record-breaking bubbles
Four AGs sue Google for allegedly tracking you without permission
On National Security | Solar power from space: Will it ever get off the ground?
Closing the loop in Kenya’s fashion industry
RUAG Space agrees AI partnership for satellite supercomputer