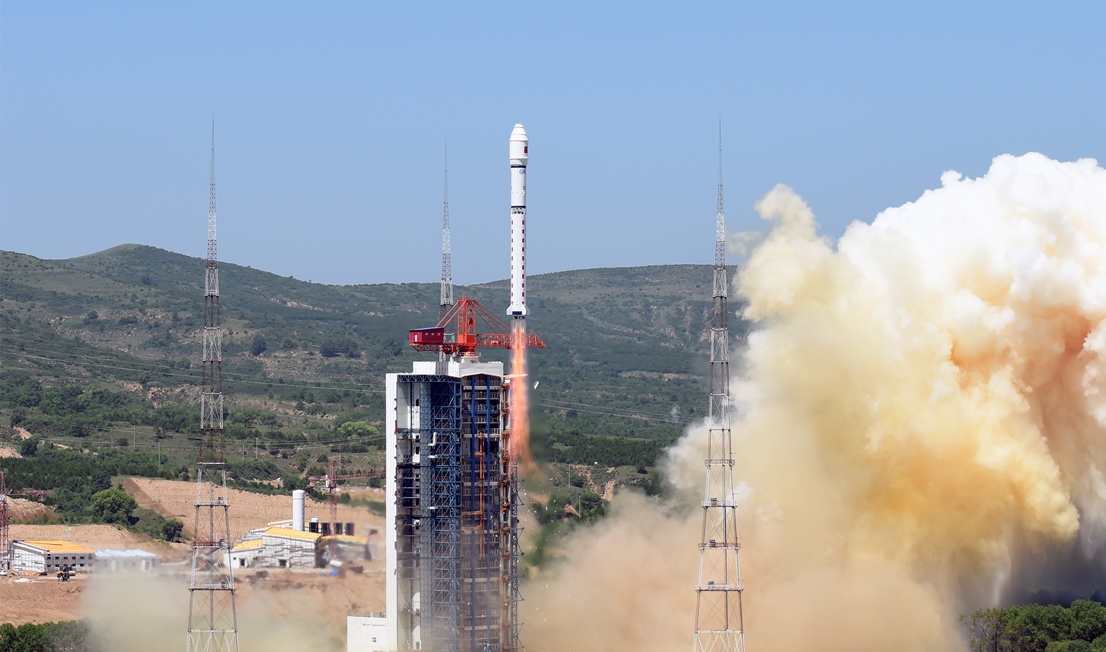 Tianlian satellites facilitate communications between satellites in low and medium Earth orbits and ground stations. The satellites allowed a recent conversation between Chinese president Xi Jinping and the Shenzhou-12 astronauts aboard the Tianhe module, as well as real-time communications for a July 3 spacewalk.

Tianlian-1 (05) joins four earlier Tianlian-1 satellites, with the previous launch being in 2016, as well as the upgraded Tianlian-2 (01), sent into orbit in 2019. Tianlian satellites perform a similar role as the U.S. Tracking and Data Relay Satellite System (TDRSS).

The mission followed closely after launches from each of the other two Chinese inland spaceports.

A Long March 2D launch from Taiyuan, north China, lifted off at 10:51 p.m. Eastern July 2. Foam insulation tiles can be seen falling from the launcher as it rose into the sky.

The hypergolic two-stage rocket sent the commercial Jilin-1 01B (wideband) Earth observation satellite into sun-synchronous orbit for Changguang Satellite Technology and in cooperation with the government of the Inner Mongolia Autonomous Region.

Three Jilin-1 Gaofen-03D high resolution satellites, again developed by Changguang Satellite Technology, were also on the flight. One of the Jilin-1 Gaofen-03D satellites is also known as “Xueersi” for education and outreach company Beijing Xueersi Education Technology Co., Ltd, in collaboration with commercial firms Beijing Commsat Technology Development Co., Ltd and Changguang Satellite. The 40-kilogram satellite will produce imagery with a resolution of 1 meter and a swath width of 17 kilometers.

The first launch of the trio in recent days was hosted by the Jiuquan Satellite Launch Center, northwest China. A Long March 4C launched at 11:28 Eastern July 4, sending the Fengyun-3E meteorological satellite into a roughly 805-kilometer-altitude sun-synchronous orbit.

The satellite has a design lifetime of eight years and is described by Chinese media as designed to provide more accurate morning weather forecasts.

The launch was China’s 22nd of 2021, including one failure of a commercial rocket. CASC plans to launch more than 40 times this year. Chinese commercial companies are also planning launches this year, including Landspace, iSpace, Deep Blue Aerospace, Expace and CAS Space.

The U.S. has meanwhile carried out 30 orbital launches, including Electron launches from New Zealand. 29 launches have been successful, with the sole failure of an Electron launch in May.

Kuaizhou solid rockets provided by Expace, a spinoff from space and defense contractor CASIC, a sister state-owned enterprise to CASC, have previously launched a number of Jilin-1 satellites. However both the Kuaizhou-1A and Kuaizhou-11 rockets have been grounded since failures in September and July 2020 respectively.

Further launches are expected in July from Taiyuan, Xichang and Jiuquan, including the return-to-flight of private company iSpace’s Hyperbola-1 solid rocket following a failure early February.

Jiuquan is expected to host most of the commercial launches, including a potential first launch of a methane-liquid oxygen launcher developed by Landspace.

Mining & Steel Company ArcelorMittal Plans $9 Billion Renewable Energy Investment In India
For the First Time in History, Rain Fell on Greenland’s Ice Sheet. What Does this Mean?
How It’s Made: Tea
Black Carbon: How Long Do These Heat-Absorbing Particles Linger in the Atmosphere?
COVID research prizes, CRISPR-like enzymes and a face-mask trial