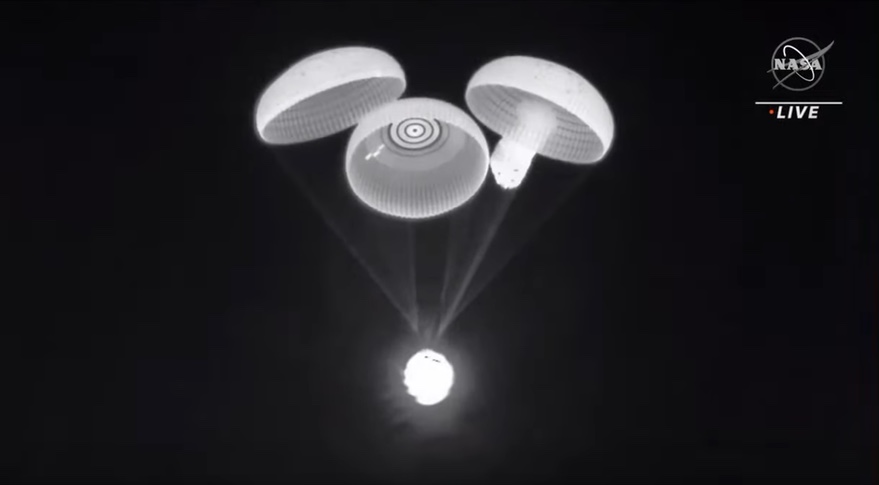 WASHINGTON — NASA and SpaceX are ready to proceed with the launch of a commercial crew mission Nov. 10 after overcoming weather and astronaut health issues as well as concerns about the spacecraft’s parachutes.

At a briefing late Nov. 9, officials said they were moving ahead with the Falcon 9 launch of a Crew Dragon spacecraft on the Crew-3 mission, scheduled for Nov. 10 at 9:03 p.m. Eastern. An on-time launch would set up a docking of the Crew Dragon with the International Space Station at 7:10 p.m. Eastern Nov. 11.

The launch had been delayed over the last week and a half because of weather at the launch site and at abort locations in the Atlantic Ocean, and because of what NASA called a “minor medical issue” involving one of the four astronauts on the mission. Weather is now favorable, with an 80% chance of acceptable conditions at the launch site for the Nov. 10 launch.

The medical issue has also been resolved. “They’ve been cleared for flight. The Crew-3 astronauts are all in good shape,” said Steve Stich, NASA commercial crew program manager. However, agency officials at the briefing declined on several occasions to say which astronaut suffered the issue or even if the issue involved an illness or injury.

NASA and SpaceX used the launch readiness review to address one new issue that arose with the return of the Crew Dragon spacecraft on the Crew-2 mission Nov. 8. During its final phases of descent, one of its four main parachutes was slow to fully inflate, lagging the other three by 75 seconds.

“It performed essentially the way it was designed to perform,” Bill Gerstenmaier, vice president of build and flight reliability at SpaceX, said of the parachutes at the briefing. Having one parachute deploy more slowly is a “known condition” that has been seen in some previous tests. “We don’t see anything that’s off-nominal that concerns us from a parachute standpoint.”

He said an investigation of the parachute issue included data from the spacecraft’s splashdown as well as analysis of the parachute itself, which was recovered and flown by helicopter to Cape Canaveral for assessment. “We’ve done an extremely thorough review. Everything looks like we’re in a good place to go fly tomorrow.”

While Crew Dragon uses four main parachutes to slow the spacecraft in its final stages of descent to the ocean, it can safely land with just three, Gerstenmaier said.

The International Space Station, meanwhile, will perform a debris avoidance maneuver about six hours before the Crew-3 launch, said Joel Montalbano, NASA ISS program manager, at the briefing. The maneuver will change the velocity of the station by 0.7 meters per second, but will not affect the Crew-3 docking, he said.

The maneuver was prompted by the projected close approach of a debris object with the NORAD catalog number of 35114. That object is a piece of debris from the Chinese FY-1C satellite, destroyed in an antisatellite weapon test in 2007. That object is in an orbit of 419 by 608 kilometers in a near-polar inclination, according to the Space Track database.

“It just makes sense to go ahead and do this burn and put this behind us, and we can ensure the safety of the crew,” he said. The debris avoidance maneuver will take the place of a reboost maneuver to raise the station’s orbit that had been scheduled for Nov. 16 and won’t affect the launch by Russia of the new Prichal node module for the station scheduled for Nov. 24.

Why California should reconsider shutting down its last nuclear plant, scientists say
The worst-performing tech stocks this week suggest the U.S. is done with Covid lockdowns
Bitcoin continues weekend volatility, now at $48,000
Preparing for today’s ESG consulting jobs
What If Humans Tried Landing On The Sun