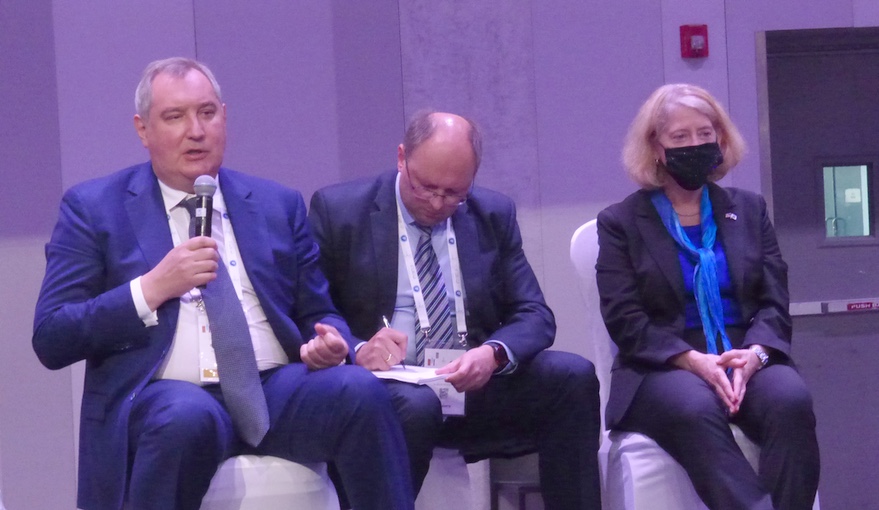 Some years at the International Astronautical Congress (IAC), one person emerges as the star of the weeklong conference. Five years ago, it was Elon Musk, whose appearance in Guadalajara, Mexico, to talk about SpaceX’s next-generation launch system turned the conference into a rock concert — people lining up hours in advance and rushing in as soon as the doors opened — and also a bit of a circus, as his most ardent fans offered him comic books or kisses.

There was no Elon Musk at this year’s conference in Dubai, but there was Martha Stewart. The domestic doyenne seemed like an unlikely choice to travel across continents to a space conference, but there she was on the conference’s final day, part of a panel discussing sustainable food development and its applications to deep space exploration.

Stewart offered a lot of star power, but not a lot of pizzazz. As part of a nine-person, hour-long panel, she didn’t have many opportunities to talk, and didn’t have that much interesting to say when she did. She did express an interest in going to space someday: “If William Shatner can do it, I can do it.”

The person who stole the show at the conference wasn’t Stewart or any of many current or former astronauts who spoke in Dubai. Instead, the unlikely center of attention, at least on the conference’s opening day, was Dmitry Rogozin, head of Roscosmos.

Rogozin grabbed the spotlight through sheer force of will, specifically, his ability to talk, and talk, and talk. “I only have five minutes to tell you about our achievements,” he said during a heads-of-agency plenary session at the conference, then proceeded to talk for nearly 20 minutes. While having to speak through an interpreter contributed to some of that excess, he talked for far longer than the other five agency leaders on the panel, who stuck close to their allotted five minutes.

His comments were a mix of updates on recent events, like the filming of a movie on the ISS, to more aspirational visions of satellite constellations, reusable launch vehicles and a nuclear-powered mission to Jupiter. A reusable rocket he showed looked remarkably similar to the Falcon 9; asked later about it, he gave a long-winded answer about costs and benefits of reusability before acknowledging that what SpaceX has done “commends a lot of respect.”

Rogozin kept the attention at a press conference that followed, fielding question after question about space tourism, new rockets and the future of the International Space Station from Russian and international media, even after the moderator implored journalists to ask questions of the other agency leaders on stage. The spectacle was made even stranger by the poor sound system in the room that required reporters to walk up all the way to the stage to ask their questions, like supplicants approaching royalty.

While there was a lot of bluster from Rogozin, there was also some news. Asked when he felt it would be safe for Russian cosmonauts to fly on SpaceX’s Crew Dragon, he said that he believed it was safe to do so now, a statement that NASA Deputy Administrator Pam Melroy, also at the conference, considered significant in an interview later that day.

What really matters, though, were the meetings behind closed doors, such as one between Rogozin and Melroy that day after Rogozin’s star turn at the conference. “It’s all about relationship building,” Melroy said in an interview after that meeting. “I felt good that we continued to deepen the relationship.” There were, though, no breakthroughs on commercial crew or the long-term future of the ISS.

The Dmitry Rogozin Show is probably a fleeting one for the IAC: with sanctions against him in place in the U.S. and Europe from his role as deputy prime minister in 2014 when Russia annexed Crimea, it’s unlikely he’ll be able to reprise his role next year when the conference is in Paris. Maybe Elon can fill in instead.

Jeff Foust writes about space policy, commercial space, and related topics for SpaceNews. His Foust Forward column appears in every issue of the magazine. This column ran in the November 2021 issue.